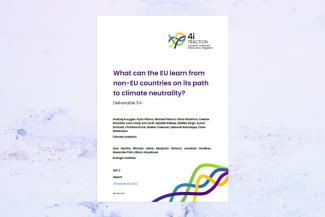 Report: What can the EU learn from non-EU countries on its path to climate neutrality?

This research report presents case study results of selected climate policies in non-EU countries. Based on the analysis, it develops recommendations how the experience of other countries can inform EU policymaking.

While low-carbon solutions, e.g., renewable sources of energy or energy efficiency, are cheaper than continuing business-as-usual, they also require high levels of investment. This investment is also needed to develop low carbon infrastructure and facilitate innovation, both in terms of new technologies as well as new business models resulting in faster deployment of the existing ones.

The scope of the transformation and the speed at which it needs to happen, does not leave much room for learning from own mistakes. Instead, the EU and its member states should learn from good practices implemented in other countries and identify aspects that resulted in the policy success and see if these aspects can be implemented in the respective regulatory framework.

To this end, this report looks at 18 good practice policies in non-EU countries that could help the EU and its member states to close policy implementation gap in areas in which observed developments are not in line with what would be required to achieve net-zero emissions by 2050 or where other countries or regions did much better than the EU. Instead of focusing on single policies, the case studies assessed adopt a broader perspective and focus on ‘archetypes’. An archetype can be understood as an assembly of policies and practices that can be applied to close a revealed policy gap. Each archetype contains two or three policies that complement each other in closing the respective policy implementation gap.

The complex nature of political and regulatory systems means that what works in one country may not work in another. Therefore, to better identify the aspects that resulted in the policy success, each case study analyses the context and background that contributed to the policy’s development, as well as the way in which the policy interacts with other existing pieces of legislation. Taking this wider lens, whereby not only the policy but the policy environment is analysed, allows the EU’s policymakers to assess how can this aspect be applied to the EU context and what needs to be adjusted or indeed discarded.

Each case study is evaluated, drawing on the successes and failures by which it can be judged. In many instances, it is not necessarily the policy itself which contains flaws, but how it interacts with other aspects of the regulatory environment. Although every case study is included on the basis of its efficacy, some of them could in fact work even better if implemented in a way that better suits the already existing policy framework in the EU. In this way, the wide lens approach which examines the broader regulatory context is integral to properly assessing a case study’s efficacy.

Finally, each case study’s most valuable learning lessons are recommended to the EU context. Drawing on the best practices to inspire European policy is the central aim of this project, so the learning lessons for the EU is the culmination of each case study’s extensive research. Given the Union’s intricate regulatory framework, alongside the member states’ own specific national contexts, we are restrained in making precise policy recommendations. Instead, we make some general suggestions on how the determinants of success of the identified policies can be best applied to close implementation gaps in the EU and its member states.

Research for the project was carried out through a combination of desk research, expert interviews, and stakeholder workshops. Experts and relevant stakeholders involved in the best practices and the EU were both consulted, to gather a deeper understanding of how each best practice was implemented as well as how it could be translated to the EU context.

The key lessons from the case studies is summarised in a policy brief.