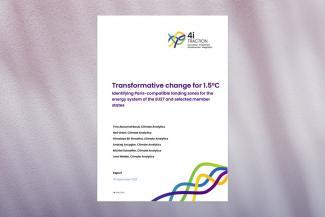 Transformative Change for 1.5°C: Identifying Paris-compatible Landing Zones for the Energy System of the EU27 and Selected Member States

First, it applies a novel framework for assessing and classifying low-carbon energy and emissions pathways, developed as part of the 4i-TRACTION project. This framework is based on the level of energy system transformation required to align with the Paris Agreement. We apply this framework to assess the latest energy and emissions pathways included in the IPCC’s Sixth Assessment Report, exploring what transformation may be necessary for the EU27 and seven selected member states to achieve the 1.5°C temperature goal. We quantify and classify pathways based on the level of transformation observed in the four cross-cutting core challenges at the heart of the long-term transformation effort, the 4i’s. These are: fostering innovation, mobilising investment and finance, rolling out infrastructure, and enabling greater integration across sectors.

Second, the report uses two illustrative mitigation pathways to perform an in-depth assessment of 1.5°C compatible energy and emissions pathways for the EU27 and seven selected member states: Germany, Finland, France, Belgium, Poland, the Netherlands and Spain. These pathways are then compared to current national plans and policies, and other national scenarios and modelling studies.

The report finds that the EU27 and member states could reduce emissions in the 2020s much faster than planned. The report finds technically feasible routes for the EU27 to reduce emissions in 2030 by 64-67% below 1990 levels by 2030, more than the currently submitted NDC of 54% (excluding LULUCF). While the recently released REPowerEU plan further accelerates the bloc’s energy transition, it remains incompatible with the 1.5°C target as assessed by this report, leading to emissions reductions of 57-58% in 2030 relative to 1990. Climate action is also lacking at the member state level. None of the seven member states assessed has a 2030 target for domestic emissions reductions which aligns with globally cost-effective 1.5°C compatible pathways. Emissions continue to be reduced strongly post-2030, with EU27 emissions reaching 85-86% below 1990 levels in 2040 (excluding LULUCF). The table below highlights the 2030 emissions reduction targets for the EU27 and selected member states.

The report then explores how this transition could be achieved at the sectoral level for the EU27 and selected seven member states: