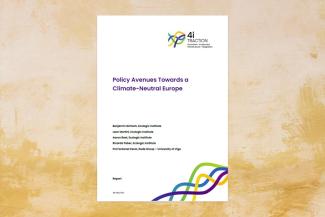 What could different policy avenues toward climate neutrality in the EU look like? Which strategies and instruments could EU policymakers choose from? This report maps four avenues how current EU climate policy could evolve towards transformative climate policy. The policy avenues are the result of a policy lab, a series of workshops, where they were developed in collaboration with stakeholders.

The policy avenues were developed with expert stakeholders in a policy lab, consisting of several workshops. The experts were given the task to sketch what transformative EU climate policy could look like when following one of the four paradigms. The resulting policy avenues were further developed by the research team and are described in the report.

The four policy avenues represent ideal-typical, alternative choices for the future of EU climate policy and are meant to map out the policy space. In reality, policymaking tends towards compromise, reflecting path dependencies as well as different and changing political majorities that have different preferences for choosing policy instruments. As a result, real-life policies will typically not be as internally coherent, and rather combine elements of different policy avenues: