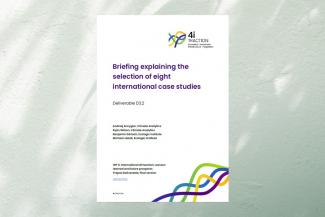 Ongoing Work in the Consortium: Selection of International Case Studies

The 4i-TRACTION consortium recently identified eight archetypes of successful policy examples from countries and regions outside the EU. In a next step, these good practices will be analysed for lessons learned to be transferred to the EU context, and implications for future EU policy design.

As part of the international dimension of the 4i-TRACTION project, the project consortium has initiated its backward-looking component to investigate case studies of transformative policies from jurisdictions outside Europe.

To identify case studies which represent good-practice solutions to the 4i- challenges, a series of workshops and interviews were held in early 2022. These exchanges were designed to include expert and stakeholder input, from those within and outside the EU, in the selection of good practices, thus enabling co-creation of the research process. The input gathered during the workshops and interviews will result in more targeted research, while at the same time broadening the number of cases to increase the relevance of the project’s results.

The process began with an initial workshop to discuss and agree on proposed selection criteria (closing gaps in the EU policy framework; relevance to the 4is; replicability; potential impact /success) and share a first set of proposed practices, which were used as a basis for additional brainstorming of potential good practice topics.

The feedback from the first workshop was carried forward in additional exchanges, including six interviews with experts from the US, Eastern Europe and Norway, as well as two additional workshops:

In a next step, case study analysis will be conducted on the following archetypes of good practices, which were identified as relating to the 4is as summarised in the table below:

The WP3 team, led by Climate Analytics, will embark on case study analysis and further stakeholder workshops through mid 2022 to elaborate how these archetypes can inform transformative EU policy development.